an appreciation of "The Good Sisters" 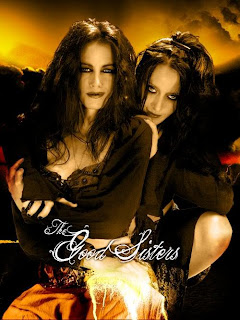 In the Spring of 2009, I received a screener in the mail of “The Good Sisters”. I had asked the ever gracious JimmyO Burril for this after connecting with him via social media. I was a huge fan of “The Chainsaw Sally Show” and, after seeing: poster art, production stills, early reviews, and a full page ad in Fangoria, I was intrigued (especially since the be-all-end-all, no-questions-asked, posers-and-pretenders-need-not-apply, de-facto Queen of Indie Horror, Debbie Rochon was starring).

I’m a sucker for “super-natural/occult” films (Hell, I even like that Clint Howard clunker “Evilspeak”), and “The Good Sisters” seemed to fit nicely into that niche. To say I was impressed would be a gross understatement…

No shit, I even had the screener copy, along with the short note that JimmyO wrote on the envelope, framed with a poster (criminally damaged by the fucking US Postal Service in transit) signed by Ms. Rochon and the incomparable April Burril that I got when I received my “commercial” copy that I eventually ordered (I absolutely HAD to have the full-on, signed copy). Yeah, I know, I’m a hopeless fan-boy…but with good reason! 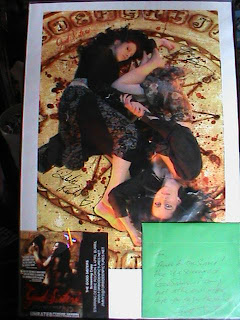 Have you seen this fucking flick?!? You should!!! To date, I have watched “TGS” 9 times in entirety (including the very cool “Dr. Gash” screening with April, Debbie & JimmyO in the chat room—that shit was EPIC!). A slow building, almost “Hammer-like”, modern gothic tale of sisters Breanne (Rochon) and Kindra (Burril) Good, the film is a skilled study in fantastic story telling. Masterfully paced with production values and a look that belies the film’s meager budget, “The Good Sisters” weaves a web of paranoia and impending doom that is punctuated by a fantastically creepy nemesis, David Calhoun as “Daniel Hopkins” (shades of Vincent Price’s Matthew Hopkins in “Witchfinder General”?) and a revelatory performance from April Burril that really shows a range and versatility only hinted at in “Sally”.

There’s violence, gore, and a fantastic ritual scene with Rochon and Burril that positively burns the screen (also, there’s a completely gratuitous scene of the ladies changing that you just know JimmyO put in there as a cinematic “wink and nod” for all of us!). And, as is often the case with indie films, there’s limited sets, but JimmyO turns this into a positive by making the apartment scenes play into the claustrophobic/paranoid feel, that just deepens the mood (Polanski’s “Repulsion”? Yeah, sorta like that.).

You know, I’ve already reviewed this film on NerdRemix, but it is such an undeniably fine example of all the things that are RIGHT about indie horror, that I felt compelled to blog about it. April Burril spreads her acting wings, Debbie Rochon turns in a performance that (I think) is among her finest, and the interplay between the two leaves you wanting more (dude—figure out an angle for a fucking sequel already!).

Buy a copy, buy it now, fuck it, and buy two in case one wears out! “The Good Sisters” is one of those films that NEEDS TO BE SEEN! BY AS MANY PEOPLE AS POSSIBLE! Seriously fuckers, make it a “Cult Classic”, it needs to be.