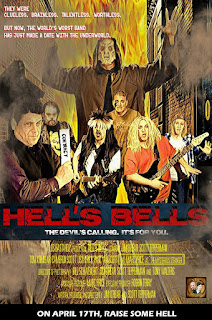 Paranormal investigator/Indie horror stalwarts Jim O’ Rear & Scott Tepperman’s “Los Bastardz” production company has unleashed (or summoned, or conjured…) a devilishly new horror/comedy with “Hell’s Bells” (please don’t sue ‘em AC/DC).
Arthur (O’ Rear) and Herb (Tepperman) are two loser garage musicians, think Bill & Ted only much, much, dumber, who are half-cocked and loaded for big time stardom. The only catch is…they suck. A chance meeting with producer/manager Caleb Gass (Tom Komisar-“House of Whores”), who previously had a not-so-chance encounter with a mysterious stranger (Marc Price…yes, that Marc Price… where ya been Skippy?) who may be a little closer to Satan than they realize, and soon the band-including their comatose bassist (Cameron Scott-“Postmortem America 2021”), their “studly eye candy” drummer Vic (Paul Van Scott), and their gruff, sexually ambiguous back-up singer Shirley (Lisa Krick) are on the road to: super stardom, big gigs, and groupies’ vaginas popping open like coin purses!

O’ Rear and Tepperman wrote, produced, and directed this film and their characters, and personalities, are obviously front and center. Toeing a semi-self aware line in their delivery, the humor and comedic timing of the duo works well more often than not, something that’s not easy to do. I laughed out loud at several parts, and kudos to them for not denigrating into easy score dick and fart jokes (however, don’t you dare get the idea that there aren’t a few of both present!). They even break the "4th wall" a time or two to great effect.

The rest of the ensemble, steal a scene or two, especially Krick and Van Scott, who both seem to relish trying their hand at comedy, and I dare you to find someone in recent cinema offerings that plays a corpse, both alive and dead, than Cam Scott!

Komisar is also a real revelation, he comes off as a seasoned pro in his role, and it was refreshing for this viewer to see him in something where he can focus on just his performance in front of the camera, rather than one of his own projects, he really stretched his acting legs here. Kim Casciotti-Tepperman and Dawn Soleri are perfect as the put upon spouses (because, hey, it’s totally plausible that Arthur & Herb probably can’t dress themselves, let alone function as adults), Rebekah Erb pops up as an impossibly cute co-worker, and there’s a way too short slow motion run shot of Cayt Fenics that’s a “must-see”. The aforementioned Marc Price comes off as suitably evil and menacing-definitely out of character for him.

Technically, the film hits all the right marks, and looks great for what I’m assuming was a low budget. Cool comic book transitions, stellar effects work, and some truly memorable Devil Music tracks (how in the righteous fuck do you somehow manage to inject “Merideth Baxter-Burney” into a hard rock song?). The creature costumes are great, and when the action gets bloody, the gore really works. The story moves along at a nice little pace, and everything holds your interest for the entire running time.

While remaining relatively spoiler free, I’ll say that if you’re looking for a fun, dopey, well made, entertaining as Hell (no pun intended) and even kinda sweet, horror/comedy, with the elements of both genres split into nice little acts, definitely take a chance on “Hell’s Bells”.
8/10
Posted by Tom's Tavern of Terror at 5:51 PM